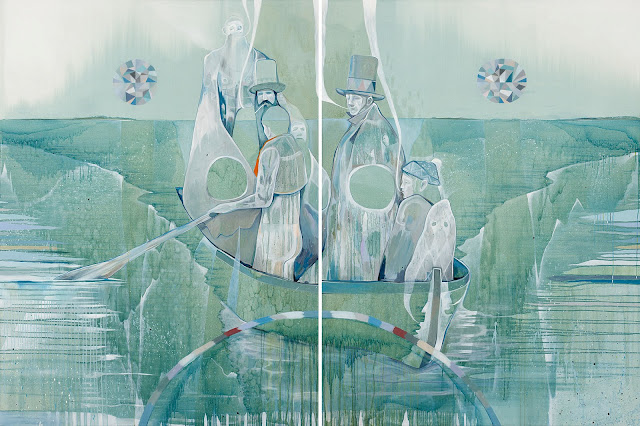 “Hurry, hurry, last days!” Margaret Olley used to say, when she felt the pinch of old age. Her final show, completed in fairy tale fashion on the day she died, reveals an artist who knew she did not have much time left. The paintings in the exhibition, The Inner Sanctum, hosted by Philip Bacon in the Sotheby’s Woollahra showrooms, have been drawing up to a thousand people a day. Many public galleries would be delighted with such attendances.
Art museums are always worried about the ‘demographic’ they attract, and the audience for the Olley show would give cause for concern: barely a visitor was ineligible for a seniors’ card. I doubt whether this mattered to Philip Bacon, who doesn’t expect to sell still life paintings to the contemporary art crowd. Nevertheless, there was no-one who loved the energy of young people more than Margaret Olley. It was one of her great pleasures to purchase works by emerging artists and donate them to public collections. On the other hand, she was just as quick to pronounce an opinion on anything she felt to be half-baked, pretentious or poorly made.


What was so pleasing about The Inner Sanctum was the relative looseness of many works. A woman in a hurry, Olley did not have the leisure to trawl back over all these pictures, touching them up, bedding them down, and perhaps robbing them of spontaneity. A small painting, Chrysanthemums (2011) had a rare freshness of touch; but so too did the large triptych, Yellow room, dated 2007. Perhaps Margaret had to work quickly, or on a large scale, in order to relax into a painting.
Most of the show was classic Olley interiors and still life, and nobody seemed to be complaining. The sad thing is that a viewer who had never met Margaret, and all those who discover her work in the future, will get no impression of her large-than-life personality from these attractive, orderly pictures.

Leaving the Olley show I made my way to Zetland, where Sullivan+Strumpf reign supreme. The girls were showing the work of Melbourne artist, Laith McGregor, who titled his exhibition, Ohne Titel (Them Listless Folk From Apocryphal). If you’re wondering how a show can be untitled and titled at the same time, this was the smallest of conceits in a diverse collection that included oil paintings, sculpture, biro drawings, a video, and a ping pong table covered in psychedelic doodlings and micro-graffiti. The paintings, I’m told, were largely based on an imaginary friend the artist had when he was still on the nether side of puberty.

Laith McGregor is decidedly odd, but there was an extraordinary sense of creative freedom in this show. McGregor has an abundance of ideas, a willingness to experiment and – a much under-estimated quality – the patience required to carry out the most laborious feats of draughtsmanship.
Audiences always tend to respond positively to labour-intensive art, as if the time put into fabrication lends a greater integrity to the work. We know this is not true, but it requires an iron will, or a very narrow mind, to ignore this factor. I fear those curators who are obsessed with art made-to-order in factories by artists who never get their hands dirty, are the narrow-minded types. Nevertheless, even the grooviest curator will allow a few labour-intensive works into the pantheon, so long as the artist is judged cool enough. It also helps if another curator has already taken the plunge.
McGregor seems well poised to join that exclusive club of emerging artists who get collected by museums at a relatively early stage. Just don’t ask anyone to explain what it’s all about.