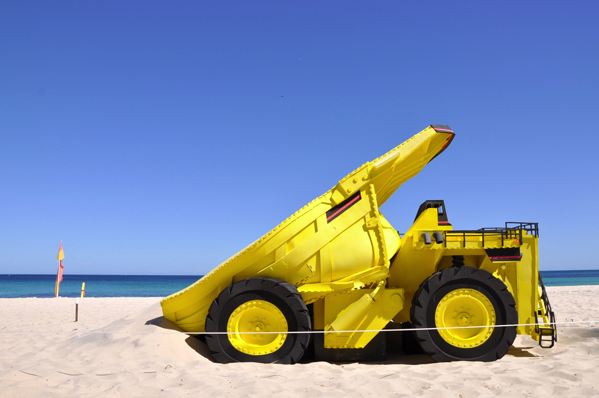 As half of the Sydney art world celebrated the launch of Art Month, and the other half clinked glasses at a valedictory show of Margaret Olley’s work, I was on Cottesloe Beach watching the sun set over the Indian Ocean.


It was the eighth incarnation of Sculpture by the Sea in Western Australia, and I had been invited to act as one of the judges of a $15,000 fellowship to be awarded to a Western Australian artist. We surprised ourselves by giving it to a large yellow dump truck made from rubberized children’s play mats, by Paul Caporn. It wasn’t in my thoughts initially, and I think the same applies to my fellow judges, Terence Maloon and Jenepher Duncan, but somehow the dump truck crept up on us.
The piece was not just child’s play: the sculpture was a wry comment on the resources boom that is helping the west’s billionaires become multi-billionaires. It is a spectacle that Australians seem to enjoy, if one thinks back to Kevin Rudd’s vain attempt to slap a tax on the super-profits. When the electorate rose up in indignation it suggested we have the most obliging working classes in the world.
Caporn’s dump truck was not only losing its load of sand, it was buckling under the weight. One might see it as a funky, contemporary version of those paintings of the Victorian era that warned Britain how its mighty empire would soon be lost.

The rest of the show, totalling 73 works, was the usual blend of solid pieces by well-known sculptors – Michael Le Grand, Lou Lambert, Orest Keywan, Tony Jones, Bruce Radke…; gleaming visions in stainless steel and/or stone, by the Japanese contingent – Keizo Ushio, Koichi Ishino, Zero Higashida, Hiroyuki Kita..; and a lively collection of works by artists from Western Australia and further afield – as far afield as Iceland, China and the United States. Some of the locals such as Alessandra Rossi, with a variation on the sandbag lounge-room she built at Bondi last year; Tony Davis, with an impressive smoke stack carved from Jarrah wood; or Jean-Marc Rivalland, with a cast iron panel van, are swiftly becoming SXS regulars.
Cottesloe, even more than Bondi or Aarhus, is a severe test of the sculptor’s ability to overcome Nature’s propensity to steal the show. On a day when the rain poured down in Sydney, the sky over Perth was the most dazzling azure, without the hint of a cloud. The horizon stretched out in a long, straight line, interrupted only by the occasional container ship. With a beach enclosed by grassy slopes, Cottesloe is the most intimate and compact of the SXS sites. Even on the busiest days it never seems as crowded as Bondi.
If the show is an institution in Sydney, it seems that Perth has not gotten over the thrill of actually being chosen as the site of a large, international exhibition. Western Australian artists are always pleased to be included rather than routinely ignored, and there is a growing contingent of eager sculpture buyers, albeit mostly small-scale. While there have been nibbles in the past from significant collectors such as Janet Holmes à Court and Kerry Stokes it is surprising how little interest is shown by the mega-rich.
There is such latent energy in Perth that if a few leading members of the billionaires club ever felt like putting some money into the arts the city could attract the same kind of attention that the Gulf states are generating. There’s nothing like vast areas of desert as a backdrop for a little cultural action.