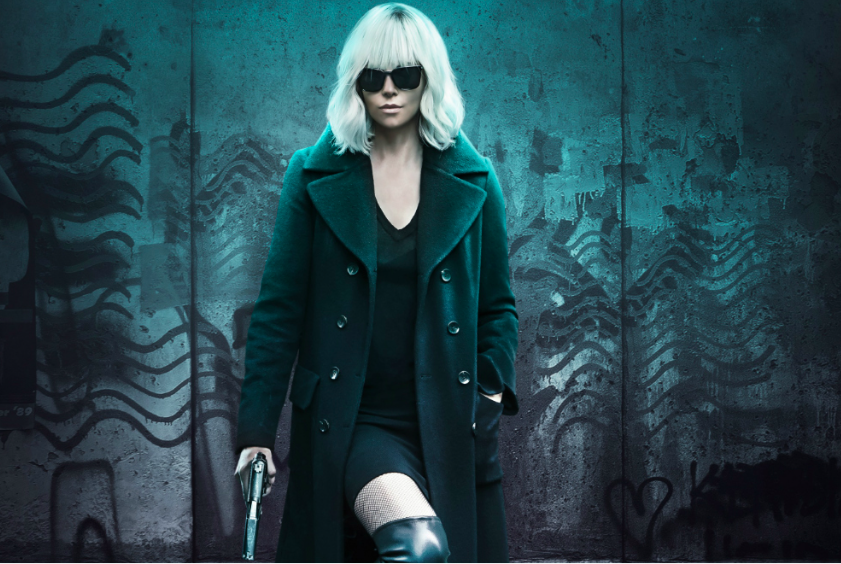 For a snapshot of the way mainstream cinema has changed over the past 50 years try watching Guy Hamilton’s Funeral in Berlin (1966) before venturing into David Leitch’s Atomic Blonde. As a fan of those early Len Deighton espionage novels, I always thought Funeral in Berlin was a pretty shallow piece of work. The redeeming feature was Michael Caine in the lead role of Harry Palmer, although nowadays I can’t hear his voice without thinking of Coogan and Brydon’s impersonations in The Trip and its sequels.
Hamilton’s film had all the standard apparatus of the Cold War thriller: a suave, hardbitten British spy, sinister KGB operatives, a scientist that had to be rescued from behind the iron curtain, loads of atmosphere in a divided Berlin.
Thirty years after the fall of the Wall Atomic Blonde picks up on this time-honoured genre, crossing it with the Hollywood superhero flick to produce a fast-moving hybrid engineered for box office success. Funeral in Berlin was a cartoonish adaptation of a very stylish novel but Atomic Blonde is adapted from a comic strip and makes no attempt to disguise its origins.
In place of Deighton’s creeping doom we have a portrait of the last days of the DDR that looks like it was modelled on Blade Runner, with added CGI and ultra-violence. Instead of Harry Palmer in a trenchcoat we have Charlize Theron as M.I.6 agent, Lorraine Broughton, sporting a wardrobe straight from the Paris catwalk. She begins the film in an ice bath and maintains her ice queen persona throughout.
There’s nothing especially secret about Lorraine (a peculiarly Australian-sounding name), who is ‘blown’ the moment she steps off the plane. A tall, blonde Amazon in designer gear, she’s not the most inconspicuous girl in Berlin, but the stiletto heels double as a useful weapon. The espionage theme is hardly more than an excuse for ferocious displays of martial arts expertise.
Director, David Leitch, is a former stuntman, and his skill lies in the action sequences rather than the narrative. The soundtrack is integral to the package, bouncing from New Order’s Blue Monday to Nena’s Neun Und Neunzig Luftballons, with inevitable additions from David Bowie’s Low and Heroes period.
The plot is so convoluted I can hardly remember it, let alone provide a summary. Lorraine is in Berlin because a British spy has been dispatched by a bad guy who has stolen a list of names that must not fall into the hands of the enemy. The dead agent, it seems, was one of her old flames, so this mission is personal.
She must first connect with Britain’s man-on-the-ground, David Percival (James McAvoy, playing yet another crazy), who seems to be more of a villain than the reliably creepy KGB guys. Is David the fabled double agent known as Satchel, that we hear so much about? Everything points in that direction.
Between them, the British agents need to bring an East German defector to safety, although it seems that David has other ideas. Meanwhile, Lorraine is being stalked by French spylette, Delphine Lasalle (Sofia Boutella), whose designs are more sapphic than strategic. This allows our heroine to free herself briefly from the tyranny of designer clothes, seasoning the viewer’s diet of constant bloodshed with a little gratuitous titillation.
As most of the story occurs in flashback, with a bruised and battered Lorraine reporting to hostile intelligence chiefs, we know she’s going to come through these murderous ordeals. One wouldn’t take odds on any of her peers.
Judged solely by the standards of the action film, Atomic Blonde is a spectacle built around a series of brilliantly choreographed fight sequences. The last thing one should expect is a cerebral spy drama in the manner of John Le Carré. This film borrows all the espionage clichés but allows them to flash past like a PowerPoint presentation.
Even though the story is set in the last days of the Wall, the politics are utterly insubstantial. The Russian and East German agents are the same generic nasties we know from every action movie, but it would be difficult to portray the Brits as good guys.
Lorraine and David are morally ambiguous characters, whose profession has hardened and corrupted them. The entire film is enveloped in a cloud of nihilism, decadence and Weltschmertz that feels like a crude caricature of Le Carré’s Cold War frisson. It’s not intended to send an existential chill down the spine, but to look cool.
The two stars of the film are Charlize Theron, who never looks less than sensational, and a wellknown brand of vodka which is brandished in front of the camera at every opportunity. Perhaps the lead role is no less of a product placement, for the true contest that animates this movie not East vs. West nor good vs. evil, but Charlize Theron vs. Gal “Wonder Woman” Gadot, for the title of Hollywood’s most glamorous head-kicker.