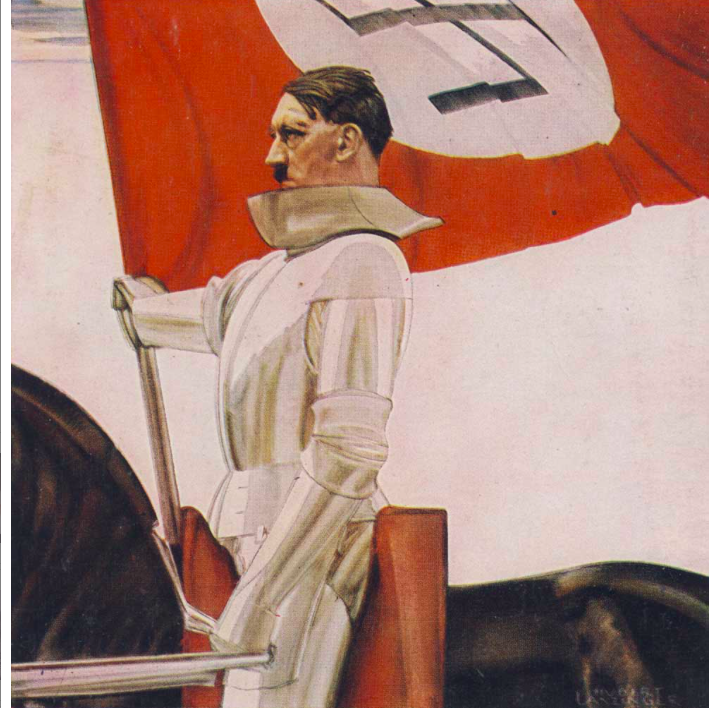 “All art is propaganda…” wrote George Orwell. “On the other hand, not all propaganda is art.” He was talking about Charles Dickens, but I thought of this line when watching the new Netflix series, Hollywood, which sets out to overturn the racist and homophobic attitudes of the movie business in the late 1940s.

As “art” is much harder to define than “propaganda”, we may as well admit that anything can be art. Things get more complicated when we try to separate good art from bad. The most brazenly subjective critic will deny the sacred label “art” to anything he or she deems to be sub-standard.

As for propaganda, it may be seen as information intended to help promote a particular cause or point of view, although a better word might be misinformation. It may take the form of actively defaming an enemy, as the Nazis did with the Jews; or a more passive strategy that simply omits mention of anything that contradicts or undermines one’s approved position.

In the Hollywood of the 1940s to be gay, black, Asian or Jewish was career poison, but the characters in the Netflix series heroically overcome these obstacles. It’s the silliest  historical fantasy of the year.

If the word ‘propaganda’ has negative connotations it’s because we have come to associate it with totalitarian regimes in Nazi Germany, the Sovet Union, and Mao’s China, but there are also libertarian varieties. During the Cold War exhibitions of Abstract Expressionist painting were sent around the world as symbols of American ‘freedom’. A good deal of contemporary art is hardly more than propaganda on behalf of worthy causes.

The totalitarian forms of propaganda were a continuation of art’s age-old subservience to Church and State, albeit with less scope for personal expression. The Russian revolution inspired a vibrant avant-garde but this was soon closed down in favour of a simpler, more legible form of Socialist Realism meant to appeal to the common man. The Nazis declared war on “degenerate” modernism in favour of classical and romantic throwbacks; while the Chinese pioneered a completely formulaic style of Socialist Realism that portrayed peasants, workers and soldiers as enthusiastic servants of the state. Artists under all three regimes showed ordinary people as ‘types’, and the leader as wise, paternal and benevolent.

The Nazis had a taste for neo-classical figures and sentimental scenes of peasant life, but no painting could be more representative than Hubert Lanzinger’s The Standard Bearer (1933), which shows Hitler as (literally) a white knight in shining armour. It may seem a piece of outrageous kitsch but it required no expert interpretation.

In Alexander Deineke’s V.I.Lenin’s outing with children (1938), made 14 years after the Bolshevik leader’s death, Lenin is shown sitting in an open-top car surrounded by happy kids. The sun shines brightly, the peasants in the fields are busy gathering hay. Although Lenin and Kruspskaya were childlesss, the revered leader is portrayed symbolically as the father of the nation. It’s not the Lenin one reads about in the history books.

As for Mao Zedong, he has probably been the subject of more portraits than any person in history, with his face plastered on mugs, clocks, bowls, vases, millions of badges, paintings and posters. He invariably exudes calm, wisdom and self-possession, looking out at us with just the hint of a smile.

Totalitarian propaganda art was almost absurdly patronising. It made no attempt to persuade the viewer of its veracity, rather it challenged him or her to disagree. In time the sheer repetition of these heavy-handed images, and the absence of any alternative, induced a sense of conviction in the populace. Socialist Realism was not the least bit realistic, being nothing but idealised scenes of peace, prosperity and happiness or celebrations of an invincible military.

The 20th century’s greatest work of counter-propaganda was Pablo Picasso’s mural-sized Guernica, made for the Spanish pavilion at the 1937 Paris World’s Fair. Intended as an angry memorial to the Fascist bombardment of a small Basque town, the artist’s Cubist distortions only seem to enhance the power of a painting intended to stir the masses, not the art critics. Picasso was happy to identify the picture as propaganda, saying it expressed his “abhorrence of the military caste which has sunk Spain in an ocean of pain and death.”

Today the images of the great dictators only induce laughter, but as a testament to the brutality of war Guernica looks as fresh as it did in 1937. The painting affirms that a work can simultaneously convey a powerful aesthetic charge and a singular political message. The art of the dictators aims to inspire emotions such as awe, respect and veneration, with an undercurrent of fear, but such feelings last only as long as a regime. They do not invite empathy or identification because the ruler is presented as a deity rather than an ordinary man. Even those smiling peasants, workers and soldiers bear no resemblance to the people one would meet in everyday life.

Guernica is different in that it seeks to touch our hearts, making us feel the horror that descended on townsfolk as the bombs rained down. Suffering is universal and easily imagined, especially in times of war.

Few works of modern or contemporary art have been able to repeat Picasso’s feat of making a piece of self-proclaimed propaganda that is also an artwork of lasting significance. In most cases the issue takes precedence over the art to a depressing degree. Think for instance of the campaigns of the Guerilla Girls on behalf of gender equality in the arts. It’s undeniable that women artists have been victims of discrimination, but the Guerilla art is merely a vehicle for conveying this message.

I could nominate numerous works that take up the cause of the environment, gay rights, racism, neo-colonialism, and so on. The causes may be just but the work is relentlessly one-dimensional. The artists have grasped the great truth that propaganda is most successful when there is a predisposition on behalf of its audience, but they have not been able to escape the trap of ‘preaching to the converted’.

The most effective propaganda plays on present-day anxieties, offering imaginary, simplistic explanations for complex problems; inflaming the human tendency to blame someone else for our misfortunes. Psychologists have suggested that hatred pays a bigger emotional dividend than love, which explains why there is so much negative advertising during political campaigns. It could even be argued that Guernica gains more power from Picasso’s “abhorrence” of the Fascists than his sympathies for their victims.

So much contemporary art is failed propaganda because it appeals to the intellect rather than the emotions, or because it pitches an imprecise message of human solidarity against an abstract evil. Those who see their own views reflected back at them will admire such work, while those who disagree will simply ignore it. If shown in the rarefied confines of an art museum it is already guaranteed a sympathetic audience, but there is also an implicit understanding that such institutions are privileged spaces in which viewers encounter views and ideas that don’t apply to the ‘real’ world.

Even those who bankroll the contemporary art scene don’t always feel obliged to take the same moral stance in their business lives. Elizabeth Sackler is the matron of an important Center for Feminist Art at the Brooklyn Museum, but the Sackler corporation is notorious for profiteering from America’s opioid epidemic. Another art patron in Hong Kong was obliged to stand down from a leadership position when it was revealed that much of her wealth came from the armaments industry.

There is a degree of sophistication required from an artwork that seeks to raise our awareness of climate change, but a piece that only sets out to beat the drum on behalf of a mythical leader can be completely crude and stupid. We can laugh at the images of a heroic Hitler, a paternal Lenin or Mao, but the same kind of imagery reappears in every populist political campaign, drawing on the same familiar tropes.

Nothing makes the point more eloquently than John McNaughton’s pictures of Donald Trump which transform the President into an all-American action hero, a father of the nation, the very embodiment of patriotism. In MAGA Ride (2020), Trump burns past the White House on a motorbike decked out in the stars and stripes, Melania clinging to him like a biker chick. A multicultural crowd of veterans, small children and ordinary Americans cheer him on. It makes Deineke’s picture of Lenin and the kids look like gritty realism.

One can – perhaps must – laugh at this woefully conceived and executed scenario, but McNaughton is tapping into a similar feeling of self-satisfaction that grips liberal-minded viewers in an art museum looking at a work that celebrates a feminist or anti-racist position. Such a work may not be a strictly truthful record, but it suggests a deeper truth; indeed, a moral imperative: that we should have gender equality, that it’s the right thing to disavow racism.

The fans of MAGA Ride might not expect to see Trump roaring around on a motorbike but they feel the picture reinforces his image as a political outlaw who has come to Washington DC to shake up the liberal establishment they detest.

In this euphoria of admiration they forget Trump is taking away their food stamps and their heath care, enriching himself at every opportunity, allowing industry to pollute waterways, undermining the justice system, and making a hash of the coronavirus response. In this sense, McNaughton’s work is pure propaganda, pushing a homegrown mythology that reinforces all the Trump positives and ignores the negatives, but it will not convince the President’s detractors. In the divided America of today all propaganda can only hope to address the so-called independents who – incredibly – have yet to make up their mind about how they will vote. It may come down to a simple choice between social justice or Hollywood.