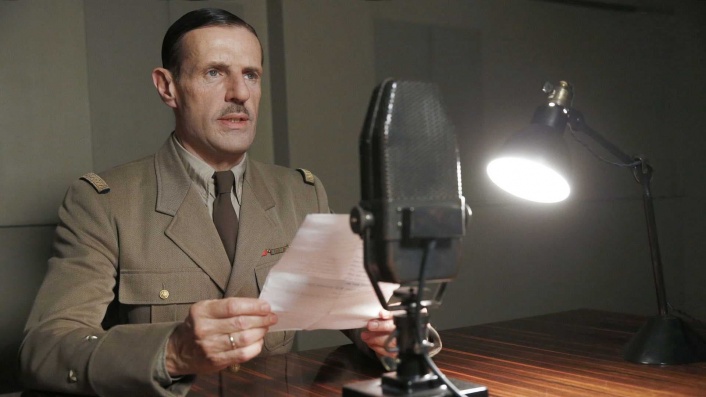 Charles De Gaulle, spinning the latest hits for all you Free French out there

Charles De Gaulle was an imposing figure, both physically and morally. Standing at 196 cms, he was a man almost everyone looked up to. As leader-in-exile of the French Resistance, the head of the provisional post-war government, and the nation’s dominant political figure of the 20th century, De Gaulle enjoyed an unshakable power and prestige. When he died suddenly in 1970, a year and a half after retiring from politics, his successor, Georges Pompidou, announced “General de Gaulle is dead. France is a widow.”

Throughout his career De Gaulle remained the archetypal military man: stiff, formal, devoted to duty, unflinching in his convictions. Not the kind of leader who would put on a baseball cap and eat a meat pie for the camera. Whatever degree of vanity or arrogance might have been discerned in his personality, he gave the impression of always putting the national interest ahead of self-interest.

As a politician De Gaulle stayed too long at the party,  ending with as many detractors as admirers. And yet he commanded a respect that made it almost sacrilegious to portray him on film. The ice was finally broken in 2006, with a two-part telemovie called Le Grand Charles, but it wasn’t until last year that Gabriel Le Bomin ventured the first full-scale bio pic of the great man.

The role of De Gaulle seems to have been no less intimidating for actors, which makes Lambert Wilson’s portrayal a notable achievement. The difficulty, as we shall see, lay in reconciling a rigid public persona with the kind of protagonist who would appeal to audiences that knew very little about French history or World War Two. De Gaulle could never be made into a matinee idol but there had to be something viewers could admire.

Le Bomin’s De Gaulle doesn’t attempt to tell the General’s life story – a project that would be doomed to dramatic failure – but concentrates on two crucial months in 1940 when France succumbed to the German advance. De Gaulle, as a newly-appointed Under-Secretary of State, had argued against a policy of appeasement when the Commander-in-Chief, Weygrand, and Deputy Prime Minister, Pétain, saw defeat as inevitable.

In a last ditch effort, Prime Minister, Paul Reynaud sent De Gaulle to London to talk tactics with the British leader, Winston Churchill. The plan, allegedly, was to relocate the French fleet and armies to North Africa, with British support, and carry on the war.

Although De Gaulle and Churchill agreed on a Franco-British Union to take the war to the Germans it was already too late to save Reynaud. He was ousted by Pétain who immediately sought an armistice with Germany. De Gaulle arrived back in France, had a brief meeting with Reynaud and, recognising that he was, himself, in imminent danger of arrest, caught a flight back to London the following morning.

Despite some hesitation from the British Cabinet, De Gaulle was allowed to broadcast messages of hope and defiance back to France. The General would become the recognised leader of the Free French, earning himself a death sentence in absentia from the Vichy regime.

By looking only at these two defining months Le Bomin is able to avoid the twists and turns of De Gaulle’s subsequent political career, and portray him as a hero and a patriot – which he undoubtedly was. Over time such qualities get a little frayed at the edges but when it was necessary to stand up against the odds De Gaulle never faltered.

Given this positive emphasis the filmmaker’s greatest challenge was to avoid descending into hagiography. This meant it was necessary to humanise De Gaulle, removing some of the military stiffness from his persona, showing him as a fallible human being, a loving husband and devoted father. Throughout all his years in the public eye the General gave few indications of these qualities. The essential aid was a 2003 memoir written by his son, Philippe, which became a best-seller in France. It revealed, for the first time, an intimate side of the man.

The film spends a lot of time showing us this more sympathetic De Gaulle. It emphasises his relationship with his wife, Yvonne (Isabelle Carré), and his affection for his youngest daughter, Anne (Clémence Hittin), who suffered from Downs Syndrome. Le Bomin doesn’t avoid the trap of sentimentality entirely, but neither does he lay it on too thickly.

De Gaulle suffers from those small irritations that plague most bio pics of the great and good. There are numerous small fiddles with historical fact in order to add a touch of drama to the story but, from what I’ve been able to learn, no major crimes against the truth. There is the usual tendency to underline important moments with dramatic music or indulge in speechifying that sounds slightly unnatural – although this is obviously a big improvement on those Hollywood scripts in which nobody says anything more profound than “What the..!” or “Yeah, right”.

De Gaulle is such a big subject for the French that it’s hard to squeeze him into a mere 108 minutes. For everyone else it may seem a strange bio pic that gives us no more than two months from a life spanning 79 years. Aside from a short burst of newsreel footage, which helps establish a context, there is little to tell us about the general’s background (as the Jesuit-educated son of a philosophy professor), or his spectacular triumphs and failures as Head of State.

Perhaps Le Bomin is contemplating a sequel or two: De Gaulle: Trouble in Algeria; De Gaulle comes in from the Cold; De Gaulle: One week in May ’68; De Gaulle vs. Godzilla, and so on. With the market for Churchill films booming can the general’s cinematic claims continue to be ignored? I’ll be happy to keep watching until the franchise is sold to America and De Gaulle teams up with Wonder Woman to save the planet.

Published in the Australian Financial Review, 8 May, 2021