It’s been years since I watched a film by Rainer Werner Fassbinder, or thought much about this most decadent, irreverent of filmmakers. At the 2021 German Film Festival, Oskar Roehler’s unorthodox bio pic, Enfant Terrible, brings Fassbinder roaring back, and it’s not a pretty sight. Fassbinder was only 37 years old when he died in […]

Death of a Ladies Man

It’s fair to say that Canadian director, Matt Bissonnette, is a Leonard Cohen fan. His debut feature in 2002 was called Looking for Leonard, and now comes Death of a Ladies Man, inspired by Cohen’s album of 1977. I’m not quite sure how an album, or the title of an album, gets transformed into a […]

A traffic light suspended from a wire across a city street is on fire. As the camera pans back we see a figure in protective clothing holding a flame thrower. It’s clear from the first scene that Pablo Larráin’s Ema is going to be something special. Rules are going to be broken, conventions overturned. The […]

Charles De Gaulle was an imposing figure, both physically and morally. Standing at 196 cms, he was a man almost everyone looked up to. As leader-in-exile of the French Resistance, the head of the provisional post-war government, and the nation’s dominant political figure of the 20th century, De Gaulle enjoyed an unshakable power and prestige. […]

In preparation for this year’s Academy Awards I’ve already reviewed six of the eight films nominated for Best Picture. Today I’ll take a look at the two that remain. I don’t know why it’s taken so long to catch up with Emerald Fennell’s Promising Young Woman, as it’s one of the most talked-about films of […]

Herman J. Mankiewicz was the kind of character Hollywood couldn’t make up. On the contrary, it was Mankiewicz who made it up for Hollywood. Once the highest-paid scriptwriter in the business, ‘Mank’ is said to have worked on 95 movies, although he spent much of his time fixing other people’s scripts and often went uncredited. […]

The Trial of the Chicago 7

This year’s Academy Awards is shaping up as an unusually open event. From the eight nominees for Best Picture there are three by female directors, three more made for streaming platforms, with only a limited theatrical release. The directors are French, English, African-American, Korean-American and Chinese-American, with only three fitting the standard white male template. […]

One rarely hears the adjective “Pinteresque” any more but it came surging to mind as I watched The Father. The edginess of Harold Pinter’s plays owed much to the way he incorporated elements of the Theatre of the Absurd (to use Martin Esslin’s wellknown term), without ever losing touch with plausible reality. In adapting his […]

How you feel about French Exit will largely come down to your feelings about Michelle Pfeiffer – one of those timeless screen beauties with an army of rusted-on admirers. Pfeiffer dominates Azazel Jacobs’s offbeat comedy so completely that even when she isn’t on screen her presence can still be felt. Yet the cost of this […] 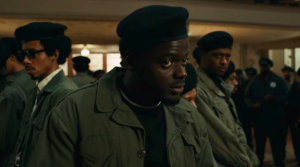 Judas and the Black Messiah

“Fred Hampton” may not be a name that rings any bells, but after watching Shaka King’s Judas and the Black Messiah you wont be forgetting it quickly. This historical drama of the 60s is driven by a memorable performance by Daniel Kaluuya in the role of the youthful Black Panther supremo. King’s theme, needless to […]