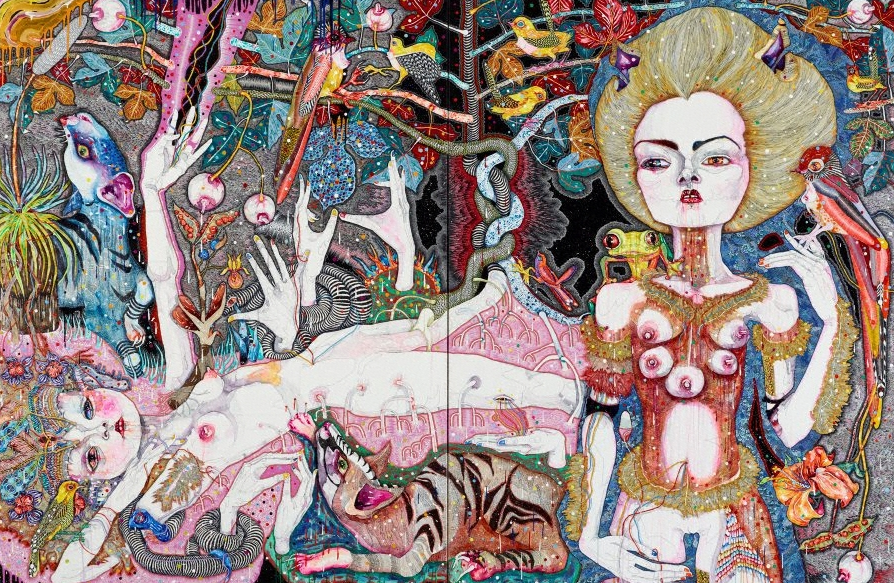 Looking at Wilderness, a new survey of contemporary painting, at the Art Gallery of NSW, I had the familiar suspicion that the artists had been chosen before the title. The procedure goes something like this:
1. Select a group of artists who seem to be cool enough to appeal to your peer group.
2. Think of a catchy, portentous title.
3. Write one or several essays that attempt to explain the relationship between the art and the title, succeeding only in creating greater confusion.
The result is another notch on everyone’s CV, and a remarkably lacklustre show. But has anybody at the AGNSW noticed?
The gallery should have been embarrassed this week by an email doing the rounds that reproduces Boatmen on the shore (1660), a painting in the Rijksmuseum by the Dutch artist, Adam Pynacker. This was the model for Sam Leach’s Proposal for Landscaped Cosmos, which took out this year’s Wynne Prize. Looking at the two pictures side-by-side, one can see that Leach has made a very detailed copy of the earlier work.
This sets an interesting precedent for the Wynne, which is awarded for “the best example of Australian scenery in oils or watercolours.” One could not expect the Trustees to recognise the Pynacker work, but they should at least have been smart enough to realise that the picture was not an Australian landscape, and was not painted from life. Their decision smacks of stubbornness and short-sightedness.
I’m not suggesting that the award be rescinded. To be technically OK, all Sam Leach has to do is point out some detail that is supposedly “Australian”, which I’m sure he could manage. The great shame is that there were a number of strong candidates for this year’s Wynne that were not appropriations of a Dutch old master.
There is a similar complacency in Wilderness, the first of a new series of contemporary art projects sponsored by the Balnaves Foundation. This is the sixth year in a row the Balnaves have made a generous contribution to the AGNSW, although the only outstanding event they have got for their money was the Bertram Mackennal retrospective of 2007.
We tend to think of “wilderness” as the antithesis and complement to civilisation. It is a place without pathways, a realm resistant to maps. It is everywhere – be it forest or desert – that human beings are not. To venture into the wilderness, like Christ or St. Jerome, was to leave civilisation behind; to swap human society for a lonely communion with God or the Devil. In more secular terms, we might see it as a voyage of self-discovery.
There is a powerful ambiguity in the way we perceive a wilderness. As Robert Pogue Harrison argues, in a fascinating book called Forests: the shadow of civilisation (1992), the wilderness (or forest) may be a place of danger and of enchantment; a hideout for an outlaw such as Robin Hood, who defends the cause of justice. The Harrison book gets a few mentions in the catalogue for the AGNSW show, but none of the writers seem to have read it very thoroughly.
The dual identity of the forest as a place of danger and a sanctuary is one of the guiding ideas in the movie, Avatar. This sci-fi eco fantasy asks us to see the wilderness as the safeguard of life, not a looming menace that has to be constantly pushed back. The forests of the planet, Pandora, conceal a mystery and a power that shames the aggressive antics of its earthly invaders. Only by surrendering himself to the spirit of the wilderness does the hero, Jake Sully, find his destiny.
This is not exactly deep thinking. One would have to be very young or very simple-minded not to recognise the clichéd nature of Avatar’s story-line. Yet the vast popularity of the movie suggests that its underlying message is now an article of faith among the general public. As our attitudes towards nature have changed, a negative concept has been progressively transformed into a benign one.
It should have been possible to put together a stimulating show on the theme of wilderness, if only the curator could have made up his mind what the exhibition was actually about. In his introductory essay, Wayne Tunnicliffe writes a brief history of modern Australian landscape, many sympathetic words about indigenous issues, and finally a disclaimer telling us that the show “is not about the landscape”. Tunnicliffe aims for: “a richer, more nuanced engagement with ideas of the wild and nature.” He has included painting “that considers how the natural world exists as much in our minds, memories and imaginations as it does in any empirical fact.”

Leaving aside the question as to where memories and imagination reside, if not in our minds, this is nothing more than a conceptual omelette. The show might still have been redeemed if it had included perhaps half as many artists, and shown their work in greater depth. It would also have benefited from a more imaginative, more theatrical presentation. The simple expedient of arranging every work – whether huge or tiny – in rows on a white wall, makes for a very dull hang.
Of the fourteen artists included in Wilderness there are some talented and dynamic painters. Foremost among them, in my estimation, would be Del Kathryn Barton, Andrew Browne, Louise Hearman, Nigel Milsom, James Morrison and Michael Zavros. Yet nothing seems to stand out from the crowd, with the possible exception of Barton and Browne, if only because of the larger scale upon which they work.
Andrew Browne, who once specialised in quasi-abstract pictures of lights seen from a distance, is now painting gnarled trees and branches, in a dim, ghostly illumination. These recent works have a gothic dimension. Some of Browne’s organic forms resemble figures or skulls, while a large diptych called Curtain (2008) is undeniably creepy. Between the thin, bare twigs of two trees lies a field of total darkness. This nothingness is more disturbing than anything that Browne might have put into this void, as it throws us back on our own imaginings.
Barton’s two gigantic paintings, come of things and we too have been there, though we shall land no more, are the most mannered, over-the-top works in the show. They are nonetheless impressive for their quality of invention, obsessive mark-making, and unbridled, polymorphous sexuality. Her figures have the icy demeanour of fashion models and the big eyes of manga characters. They seem to be interwoven with the landscape, pierced by writhing, snake-like forms. Genitals and nipples are on prominent display, as though advertising an obscure fertility ritual. One could easily see these paintings linked with some famous supernaturalist such as Aleister Crowley, or an avant-garde filmmaker such as Kenneth Anger.
Viewers can at least appreciate Hearman and Milsom as superior quality painters, and Morrison and Zavros for their visual wit and sense of detail. The best that can be said about much of the other work in this exhibition is that it is inoffensive. With some pieces that defence can’t be invoked. For instance, Stephen Bush’s large, psychedelic canvases and garbled imagery, hark back to a style thought very groovy in the 1980s. Making a virtue of incoherence and a bilious colour scheme, they are as self-consciously postmodern as Baz Luhrmann’s Australia. There is no point in saying they are bad, because they are deliberately bad, which means – if only in the artist’s mind – they are successful.

Another artist long past his expiry date is Tony Clark, who has been fiddling around with the same crude, little paintings of temples for over twenty-five years. Even Wayne Tunnicliffe discerns “a suggestion of cynicism in Clark’s serial repetition,” although he is quick to praise the “painterly nature of the works.”
For “painterly” read “amateurish”, but because this amateurish junk is perpetrated by a professional artist, we are expected to see it as a brilliant tactic. We have arrived, once again, at that postmodern paradox whereby all that is deliberately bad is necessarily good.
Since Clark’s long-avowed theme is ‘classicism’, it is hard to see where he fits into the ‘wilderness’ mode, but this is not uncommon in this show. A wilderness is a place where one gets lost, and that’s precisely what has happened with this exhibition.
To really explore the wilderness as kind of mental landscape, one needs to visit Rex Irwin, who is showing the complete set of Goya’s The Disasters of War (1808-1812). These are among the most famous etchings ever made: surreal, brutal images from the Napoleonic invasion of Spain that have laid the foundations for all the visual chronicles of death and disaster that have followed. What makes these depictions of murder, rape and torture even more chilling are the deadpan, ironic captions, such as That’s tough! Or This is bad. Forget the longwinded essays, that’s all one needs to say.