You Will be My Son 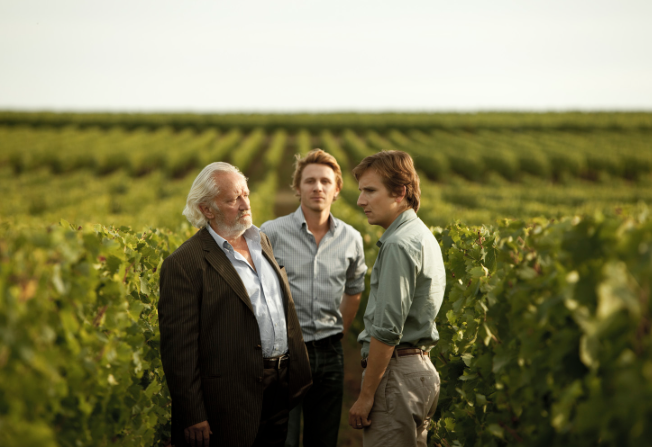 Blood may be thicker than water but it runs a distant second to fine wines. At least that seems to be the way, vigneron, Paul De Merseul, views the world. Paul, played by veteran actor, Niels Arestrup, is the stern patriarch in Gilles Legrand’s You Will be My Son, a taut, lean story of tensions between father and son set in the vineyards of the Bordeaux region.
Paul is a dominant  figure, used to giving orders and having them obeyed without question. He is intelligent and shrewd, with a sharp wit. He does not suffer fools gladly, and seems to have classified his son, Martin, under that heading.
Martin, played by Lorànt Deutsch, is being crushed by his father’s perpetual scorn. He has a university degree in viticulture that invokes Paul’s contempt. Every attempt to win his father’s esteem ends in ruins, as Paul finds evidence of carelesness and incompetence. The process of paternal humiliation is so far advanced that it has become second nature to Paul, who insults and belittles his son almost by force of habit.
Jean-Jacques Rousseau is said to have been beaten so much as a boy that he acquired a taste for flagellation. Unfortunately, Martin has not been able to emulate the philosopher who was once viewed as Europe’s greatest authority on the ideal way to bring up a child. Martin has never gotten used to Paul’s tongue-lashings, and each new barb makes him shudder as if pierced by an arrow.
At the point we enter the story it is impossible to say whether Martin is as ineffectual as his father seems to think, or if he has been so beaten down he finds it hard to do anything well. Either way, when he learns the estate’s long-time manager, Francois, (Patrick Chesnais) has been diagnosed with pancreatic cancer, he begs his father to let him take over responsibility for the new vintage.
Paul agrees, with palpable reluctance, but soon changes his mind when Francois’s son, Philippe (Nicolas Bridet), arrives back from the vineyards of California, where he has been winning a reputation as an emerging wine-maker. Handsome, self-confident and talented, Philippe is the son Paul always wanted. With the ruthless egotism that characterises all his actions, he decides to bring Philippe into the business and even investigates the possibility of legally adopting him.
Paul’s proposal is not only devastating for Martin, it has a deep impact on Francois, who sees his son being taken from him even before he is dead. He realises that for Paul, he and his family are nothing more than posessions.
If Paul’s dislike of his offspring seems almost pathological, it is partially explained by the fact that Martin was a weak, sickly child whose premature birth put his mother under such a strain she died young. In his already fraught state, Martin is not ready to accept the idea that he murdered his own mother.
With such an emotionally charged family drama, there is inevitably a touch of the Old Testament or Greek tragedy, but the action takes place against a backdrop of great natural beauty. While Legrand never loosens his grip on the story, he presents us with an ode to the French wine industry with all its grand traditions. When the characters are not speaking tersely to each other they are tasting wines and giving opinions.
This rigamarole is so seductive it is to the director’s credit he never allows the touristic aspects of the film to distract us from the drama. Against all industry propaganda it seems that some people may spend their lives drinking the most exquisite wines and not become more civilised.