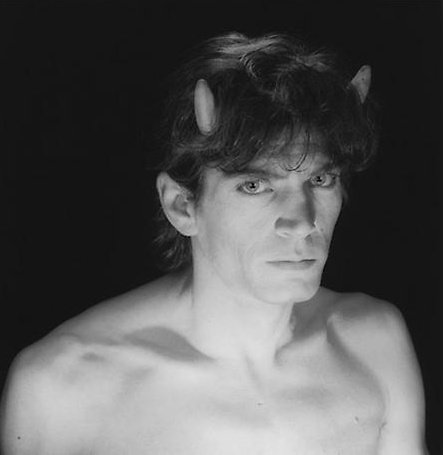 It may be the acid test of political correctness but it should be possible to dislike Robert Mapplethorpe’s work without being viewed as homophobic. Mapplethorpe often said he didn’t wish to be known as a “gay artist”, but he is such an icon for the LGBT community it’s virtually impossible to dissociate his work from his sexuality.
At the time of his death, in March 1989, at the age of 43, Mapplethorpe was arguably the most famous photographer in the world. For “famous” one might substitute the word “notorious” and it would do just as well. For Mapplethorpe, fame was inextricably bound up with celebrity, and its sluttish handmaiden, publicity.
Mapplethorpe will always be identified with that period from the 1970s to the mid-80s, in which homosexuals stopped being fearful and secretive, and stepped boldy into the spotlight. It was also a boom time for feminism, and other movements that challenged outmoded social conventions.
It was a period of sexual licence curtailed dramatically by the AIDs epidemic, and Mapplethorpe’s career follows this curve precisely. He explored the outer limits of sexuality, before being cut down by the disease. Unlike Andy Warhol, who was essentially a voyeur, Mapplethorpe was an eager participant in the sexual underworld he recorded. At one point he described himself as a “nymphomaniac”, who had slept with “only” a thousand men.
Such claims seem outrageous in these cautious, demure days. It makes the late 70s sound like one long Roman orgy. Rather than shocking his audience, Mapplethorpe’s work might now be viewed as nostalgic for a time when sex might be practised without the precautions and inhibitions. One might also look to the Internet, which has made extreme sexual material so accessible that the thrill of breaking taboos has been dissipated.
Robert Mapplethorpe: The Perfect Medium is yet another package show for the Art Gallery of NSW, this time culled from dual exhibitions held last year at the Los Angeles County Museum, and the J.Paul Getty Museum. Instead of a catalogue there is a substantial book, published to coincide with the Los Angeles shows, which retails for $90.
Once again I’m left marvelling at the cavalier way the AGNSW has taken what’s on offer and contributed nothing original. I know I’ve said it a dozen times, but this kind of complacency only serves to transform a museum into a venue.
Mapplethorpe owes some of his success to a ruthless emphasis on his own career. He spent more energy networking than he did taking photos. He didn’t develop his own prints. He had assistants do the lighting, and even allowed Dimitri Levas to choose props and style manage the shots. Thinking of himself as an artist rather than a photographer, his focus was solely on the image.
Although he had no interest in technical matters, Mapplethorpe was a control freak with very clear ideas about the way a picture should be shot, printed and framed. He had a rigid, classical sense of beauty that relied heavily on symmetry. Flaws and blemishes were removed from his portraits, making his subjects look as immaculate as marble statues. When he photographed real marble statues he made sure they were scrubbed clean.
The scrubbing removed any trace of previous usage, and the same might be said of his celebrity portraits. The wicked, the stupid and the decadent emerge from the process looking like otherworldly creatures. Mapplethorpe saw “beauty” where others might see “flattery”.


Every so often one of his sitters brought something of themselves to the photo. Louise Bourgeois turned up at Mapplethorpe’s studio carrying a phallic sculpture under her arm, which gave him the prop for one of his most famous portraits.
I’ve always felt Mapplethorpe’s finest portrait was the picture of Patti Smith taken for the cover of her debut LP, Horses (1975). Smith chose to dress in an androgynous manner, and had the idea of draping a jacket over her shoulder, like Frank Sinatra. In contrast to the head-and-shoulders shots he would later produce for $10,000 a session, with this portrait Mapplethorpe thought hard about composition. The diagonal shadow on the wall, the play of tones, the disposition of head and hands – all these elements make for a truly memorable image.

It also helped that he was so intimate with Smith, a former lover and lifelong soulmate. With most of the other people in his life, Mapplethorpe was careless to the point of disdain. The other exception was probably art collector, Sam Wagstaff, who acted as a wealthy sugar daddy and father figure. Long after they had separated as lovers, Wagstaff purchased a loft for his protégé, promoted his work tirelessly, and made him the major beneficiary of his will.
The AGNSW exhibition brings together a cross-section of Mapplethorpe’s most famous images, including the portraits, the flowers, the black male nudes, and shots of female bodybuilder, Lisa Lyon. The publicity for the exhibition dwells on conspicuously glamorous pictures, such as a portrait of Isabella Rossellini, while hinting at the more transgressive works.

However, as David Walsh found with his Museum of Old and New Art, there’s no better way of ensuring no-one is offended than by announcing that viewers may be offended. Consequently, the AGNSW has placed the most controversial Mapplethorpe images in a walled-off section of the show. Upon entering, the chief surprise for many may be how tame these photos seem today.
A picture such as Man in Polyester Suit (1980), which was such a talking point in the 1980s, now seems like an exercise in black humour rather than eroticism. It depicts a black man in a cheap suit, whose penis dangles from an open fly. The head is cropped from the photo, making the subject a generic figure – arguably a piece of racial stereotyping, suggesting that a poor black man’s best (only?) asset is his dick. By all accounts this is not too far from Mapplethorpe’s actual views about his black models.

In a catalogue essay, Richard Howard once wrote that Mapplethorpe had “aestheticised the penis”, but the real issue is that Mapplethorpe aestheticised everything. There is not a natural moment in his photos: every figure, every face, every object, is subject to a severe formalism that turns it into Art.
The historic accusations that Mapplethorpe was a pornographer have never seemed so naïve because the formalisation of any act, however lewd, is a way of removing it from the stream of life and the play of human fantasy. The museum at its most permissive puts Eros in the deep freeze.
Robert Mapplethorpe: The Perfect Medium
Art Gallery of NSW, 27 October, 2017 – 4 February, 2018
Published in the Sydney Morning Herald, 18 November, 2017