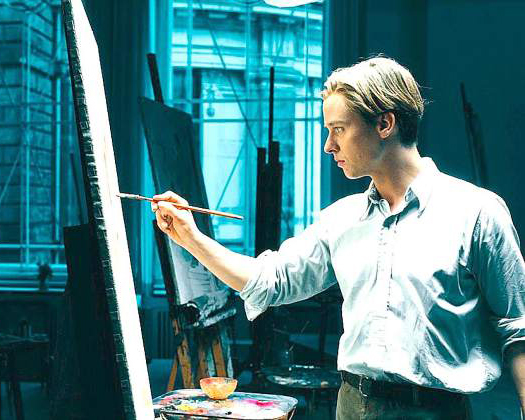 Kurt stays focused on the easel

Gerhard Richter’s official biography, written by Dieter Elger, curator of the artist’s archive, is a very dull book. This is partly because Richter, a micromanager of his own career, is famously protective about the details of his life. In Never Look Away it is director, Florian Henckel von Donnersmarck’s achievement to have recognised a powerful set of allegories about modern Germany, art and power in the facts Richter revealed during three weeks of conversations. It may be proof of Donnersmarck’s success that the artist has now dissociated himself from the film.

The movie draws on many historical details but it remains a fictionalised account. In the Elger book the single most explosive fact is written off in a few lines: the revelation, uncovered by investigative journalists, that Richter’s father-in-law, the physician, Dr. Heinrich Eufinger, was responsible for the forced sterilisation of mental patients under the Nazis. Worse still, he is believed to have taken part in the euthanasia program that would see 250,000 patients murdered to purify the national bloodline, and later to release beds for injured soldiers.

One of those patients was Richter’s Aunt Marianne, whose memory is preserved in a painting of 1965, based on an old photo in which she holds baby Gerhard on her lap. It’s possible that Dr. Eufinger might have signed the order that consigned Aunt Marianne to her death.

Donnersmarck has taken that possibility and crafted a tale in which the spectres of the past loom menacingly over the years of Germany’s post-war recovery. The story begins in 1937 with the young Kurt Barnert (Cai Cohrs) being taken through the infamous Degenerate Art exhibition with his aunt Elisabeth (Saskia Rosendahl). After listening to a guide sneer about a small Kandinsky abstraction she says to Kurt: “Don’t tell anybody, but I like it.”

Elisabeth is a glamorous girl, with a sparkle in her eye that gradually reveals itself as schizophrenia. After being found seated nude at the piano she is carted off to a mental instititution. Her last words to her nephew are a reminder to “never look away”.

At the end of the war, during which Kurt’s family have watched from a distance as Allied bombers destroyed Dresden in one horrifying night, life begins anew in the German Democratic Republic. The young man’s obvious artistic talent gets him accepted to art school where he learns to paint in the approved Socialist Realist manner.

Kurt (Tom Schilling) becomes passionately attached to a fashion student named Ellie (Paula Beer). The major obstacle for the young lovers is Ellie’s father, Dr. Carl Seeband (Sebastien Koch), whom we have already seen in an SS uniform, then as a prisoner of war. We’ve watched him endorse the Nazi euthanasia program, sign aunt Elisabeth’s death warrant, and save his own skin by helping deliver a baby for the Russian prison commander.

Dr. Seeband, who insists on being called “Professor”, is a thoroughly despicable character, ready to adapt to any creed that furthers his ambition. In his own mind, he is a superior being with a code of honour. One wonders how closely he resembles Richter’s real father-in-law.

When Kurt and Ellie defect to the West they make their way to the most avant-garde art school in the world, the Düsseldorf Kunstakademie, where the presiding guru is Professor Antonius van Verten (Oliver Masucci), AKA. Joseph Beuys. Soon Kurt has met up with a band of like-minded students who may be identified as Günther Uecker, Konrad Fischer and Sigmar Polke – or is it Blinky Palermo?

Thoroughly confused by the creative chaos going in around him, Kurt tries a number of experiments, and suffers an epic ‘artist’s block’. The breakthrough comes when he hits upon the idea of making paintings from family photos taken in East Germany. He has stopped trying to make contemporary art, and has found himself at last.

This is a brief summary of a long, complex movie in which leimotifs and symbols are woven together with a fastidiousness that is truly, deeply German. The story reaches a climax through Kurt’s paintings, which dredge up all the dark, secretive things that have been felt but left unspoken for much of his life. In the midst of the lunacy of the Düsseldorf Kunstakademie he has struck a vein of truth. He has also succeeded in driving a wedge between himself and the sinister Dr. Seeband. It leaves Sebastien Koch with one electrifying scene, when confronted with his son-in-law’s paintings.

It looks like a happy ending for Kurt, but his instincts, honed in the paranoid environment of the GDR, where one in 6.5 people were Stasi informants, don’t allow for a moment of catharsis. Kurt, the successful artist of the capitalist world, is almost identical to Kurt the rising star of the socialist world. Only his paintings speak honestly, but the language of art is open to all kinds of misinterpretation.

For years it was accepted that Richter’s photo paintings were images of strangers, taken at random from magazines – hence the film’s German title: Werk ohne Autor. Nobody ever asked about “Aunt Marianne”. It made the pictures seem more impersonal and abstract, in tune with the temper of the times. It also discouraged prying questions. Only in recent years has the locked door of Richter’s art been prised open, revealing the history attached to that image of his Aunt,  or Uncle Rudi in his Wehrmacht uniform.

By opening that door a little further Never Look Away has incurred the displeasure of the artist, whose confessional instincts were quickly appeased. “It is far better,” Richter said in 1966, “to paint a portrait from a photograph, because no-one can ever paint a specific person – only an image that has nothing whatever in common with the sitter.” This movie strives to refute that argument, showing how an image may not only resemble a person, but have the power to raise her from the dead.