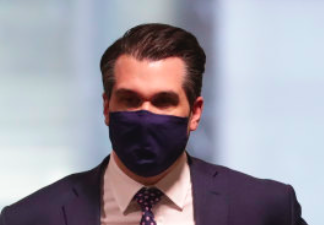 It’s always interesting to study the photos the newspapers run of somebody they really can’t stand. There are figures, such as Donald Trump, who look more frightful when they’re smiling than when they’re scowling or making faces. In other cases, a few discreet decisions have been made. Scummo with his baseball cap eating a meat pie was not a good look, but that’s an image he has  actively cultivated – as a sort of Yobbo Everyman who just happens to be Prime Minister. In the case of Assistant Treasurer, Michael Sukkar, the Sydney Morning Herald made the apparently innocent decision to depict him wearing a mask in the context of a story detailing his dubious political dealings with tax payers’ dollars. It makes him look like a bandit who’s come to rob the bank – which is an appropriate metaphor.

As the evidence of misconduct has been laid bare in the press for all to see, one wonders if Scummo will follow his usual pattern of denying any wrongdoing, and imposing no penalty on the Minister. It would only be consistent with the way he’s behaved with Angus Taylor and others. There is no longer even the pretence of taking responsibility. The political process is simply a grubby pub brawl in which the idea is to win by any means, fair or foul.

Michael Sukkar has always come across as a right-wing ideologue, ready to support agendas that work for the few rather than many. Is it surprising that he appears to have been bending the rules to suit his own interests?

Neither is it any revelation that the Education Minister, Dan Teehan, is defending the government’s new university measures that will double the cost of a humanities degree, by saying it’s all about jobs. The implication is that an arts degree is a waste of time and money, a mere self-indulgence, while a skills-based course acts as a guarantee of employment.

By now we should recognise that no degree automatically leads to a job any more, and that arts degrees also create employment opportunities. My very basic arts degree is what got me started on the work I’ve been doing for over 30 years, although a career in critical writing is certainly the last thing this government would encourage. For Scummo, the ideal voter clings jealously to any job, is fearful of change, and ready to accept whatever excuses the government offers when things go pear-shaped.

It’s a calculated move because – regardless of the Australia Council surveys – the government knows that only a small percentage of Australians have any particular fondness for the arts, and – beyond a certain point in one’s life – it’s easier to pretend it’s all a big wank rather than cultivate an interest. In other words, it plays on the worst forms of ignorance and prejudice in the name of that great, mythical Holy Grail – “jobs”.

Will the Labor Party and the cross-benches let these changes stand – with only the concessions of social work and psychology being saved? If they do, it merely shows how thoroughly weak and valueless our politicians have become if they can’t recognise the importance of the humanities to any society that calls itself ‘civilised’.

This week’s column looks at Khaled Sabsabi: A Promise at the Art Gallery of NSW. It’s an appropriate title, as Sabsabi is an artist whose star has been on the rise for the past decade, but I’ve almost always felt that his work promises more than it delivers. I’d like to think the vogue for identity politics plays no role in his popularity, but I suspect it’s crucial. There’s no reason to doubt Sabsabi’s sincerity – or his work ethic – but I find he’s only telling me things that I already know. In looking at works of art we always want to be surprised, and this rarely happens with pieces of an overt political persuasion, where the big thrill is seeing a reflection of your own convictions. I often feel I’d sooner see something that challenged and contradicted my views, but then I browse the opinion pages of The Australian and think, “Hmmm, maybe not.”

As a bonus I’ve added a catalogue essay I wrote for Paul Higgs’s exhibition, Material Energy. It’s a landmark outing of sorts for this artist, as it contains the biggest and best things he’s ever done.

The film up for review is Christopher Nolan’s Tenet, which is being billed as the saviour of the cinema during the coronavirus. Well, if this movie is the saviour it appears the cinema is doomed. With the exception of David Lynch’s Inland Empire – which is in a class of its own for obscurity – I can’t remember a more confusing plot. It is, however, a film that ingers in the mind, as you’ll spend days trying to figure out what was going on. This might be seen as a kind of success.