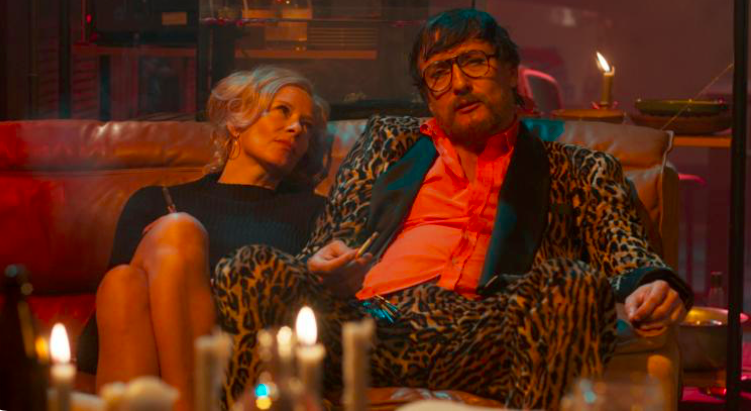 Would you buy a used German movie from this man? Oliver Masucci as Rainer Werber Fassbinder in 'Enfant Terrible'

It’s been years since I watched a film by Rainer Werner Fassbinder, or thought much about this most decadent, irreverent of filmmakers. At the 2021 German Film Festival, Oskar Roehler’s unorthodox bio pic, Enfant Terrible, brings Fassbinder roaring back, and it’s not a pretty sight.

Fassbinder was only 37 years old when he died in Munich of a drug overdose and general debilitation. Next Thursday will be the 39th anniversary of this sordid exit. Within a span of 14 years Fassbinder made 41 movies and two TV series, and directed 24 plays. His energy was incredible, but it was fuelled by a massive consumption of alcohol, cocaine and barbiturates. One could argue the director was one of a distinct breed of self-destructive anti-heroes inflamed by the conformity of German society. Think, for instance of the drunken anarchist artist, Martin Kippenberger (1953-97), or the drug-addicted novelist, Hans Fallada (1893-1947).

The homoerotic themes of Fassbinder’s movies, which reached a crescendo in his final fling, Querelle (1982), would qualify him as a gay icon if he hadn’t been so extreme, spiteful and filled with self-loathing. The mood swings, abetted by substance abuse, saw Fassbinder veer between megalomania and blubbering helplessness. He surrounded himself with an entourage that put up with his attacks because of the money he threw around or the career opportunities he offered. But his relationships almost always ended badly, as we see in this film.

Oliver Masucci gives an uninhibited performance in the lead role, in a movie that makes little attempt at realism. Whatever the psychological truth of this portrait, the sets are often no more than a flimsy, garish backdrop for the meltdown that passed as Fassbinder’s life.

I’m not sure I’d recommend Enfant Terrible to anybody who wasn’t familiar with Fassbinder’s work, as it might be impossible to imagine such an extreme personality coming up with a movie as bittersweet as Ali: Fear Eats the Soul (1974), or as sophisticated as The Marriage of Maria Braun (1979). To understand Fassbinder’s talent, and his dark, ruthless sensibilty, one really has to watch the movies first.

One of them is included in this year’s GFF. Lola (1981) is the second in Fassbinder’s acclaimed BRD Trilogy, which includes ‘Maria Braun and Veronika Voss (1982). It’s a luridly-coloured remake of Josef von Sternberg’s The Blue Angel (1930), with Barbara Sukowa in the Marlene Dietrich role, but Fassbinder adds his own cynical reflections on German morality and hypocrisy.

Perhaps Fassbinder’s most ambitious project was Berlin Alexanderplatz (1980), a 15 hour, 14-part TV series, based on Alfred Döblin’s classic 1929 novel of the Weimar Republic. The only other time the book had been adapted for the screen was by Piel Jutzi in 1931.

The closing feature of this year’s GFF is a new adaptation of Berlin Alexanderplatzby Burhan Qurbani, which stars Welket Bunguê as Francis (later Franz), a refugee from Guinea-Bissau who is swept into the criminal underworld of modern-day Berlin. I know it sounds too politically correct for words, but Qurbani’s version, at almost three hours, proved to be compulsively watchable. He brings out the universality of a story that can be comprehensively updated but retain the atmosphere of a bleak, seedy fairytale in which the lead character’s desire to be “good” is undone, time and again, by his own weakness and by a system that makes crime the only route out of poverty. There are standout performances by Albert Schuch in the role of Reinhold, the psychopath Francis accepts as a friend; and Jella Haase as Mieze, the prostitute who offers our hero a fragile promise of redemption.

For fans of German cinema it will be no surprise there are few laughs to be had from the 30 films that make up this year’s selection. The most conspicuous attempt is Dani Levy’s The Kangaroo Chronicles, which might be expected to have a special appeal for Aussie audiences. It’s the story of a communist kangaroo and a poor musician who team up to fight a right-wing politician in Berlin. Is this film funny? I don’t know, as I haven’t seen it. Funny peculiar, most definitely.

A more promising (unseen) prospect is Dominik Graf’s Fabian: Going to the Dogs, based on a novel by Erich Kästner, which takes us on another odyssey through Berlin in the Wiemar years. Not as dark and dangerous as Berlin Alexanderplatz, it apparently loses nothing in terms of cynicism and Weltschmerz.

Of the films I have seen, even when there is a comic element it doesn’t raise more than a giggle through gritted teeth. This is the case with Next Door, the directorial debut of actor, Daniel Brühl, who also stars as an unflattering version of himself – an internationally renowned actor whose vanity is checked by an encounter in a local bar with the neighbour from hell. That character, played by Peter Kurth, has a corrosive line in conversation that eats like acid into Daniel’s sense of well-being, making his fame into a distinct liability. It also reveals one of the professional hazards of the actor’s vocation: the compulsion to be always acting – whether on stage, on screen or in everyday life.

The Audition, directed by Ina Weisse, is another film about a character who cannot separate her private life from her professional commitments. The excellent Nina Hoss plays Anna, a music teacher whose rigorous perfectionism poisons her relationships with her family and with a favourite pupil. It’s a stark, slow, tough movie in which the emotional temperature keeps gradually rising as Anna tries to maintain the impression she is in control while feeling ever more helpless.

I’ll finish on an unorthodox romance that has been a hit movie in Germany. Vanessa Jopp’s The Space Between the Lines tells the story of two people, Leo (Alexander Fehling) and Emmi (Nora Tschirner), who meet on-line as a result of a misdirected email. The conversation begins as an exchange of barbs but evolves into a meeting of souls, in which each correspondent reveals progressively more about their lives, and becomes caught up in a relationship simultaneously distant but intimate.

It may seem strikingly contemporary that a love story can be conducted by email, but it’s hardly more than a new twist on the epistolary novel of the 18th century, in which the action is related in an exchange of letters. Goethe’s The Sorrows of Young Werther (1774), a best-seller of the age, is as good an example as any. Thankfully there is a lot of this story that isn’t told in email form but the interest lies in how experiences are translated into words as each protagonist decides what to reveal and how to reveal it. As films go it’s polite and slightly contrived, but after Fassbinder’s excesses one can appreciate a little reticence.