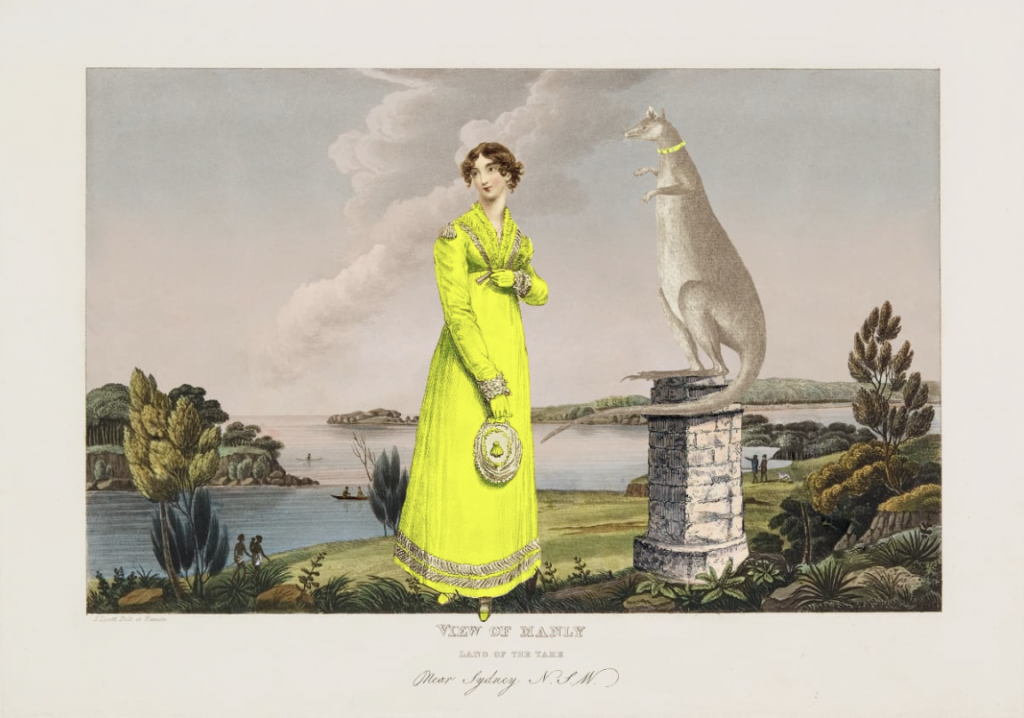 As a title, Destination Sydney, is not sounding any better with age, but this third installment of the show is reputedly the last. As with the exhibitions in 2015 and 2018, it’s a collaboration between three of Sydney’s leading public venues: the S.H. Ervin Gallery, Mosman Art Gallery, and the Manly Museum and Art Gallery, each showing work by three Sydney artists.

Most artists are happy for any opportunity to display their work, and Destination Sydney allows participants the luxury of a mini-survey. The exhibition is subtitled: The Natural World, which suggests a focus on landscape, but this is essentially a women’s show. The nine artists and nine catalogue essayists are female, and the gallery directors’ foreword makes the curatorial intention explicit, calling for a reconsideration of the legacy of Sydney’s female artists. Is there anything intrinsically feminine about “the natural world”? It seems like a very old-fashioned piece of gyno-romanticism.

There are only loose affinities between artists in each component. Manly is probably the most disjointed, with Joan Ross’s historical satires, Merran Esson’s distinctive ceramics, and Fiona Lowry’s airbrushed paintings. For more than a decade, Ross has been making multimedia works that borrow imagery from the early days of settlement to cast a parodic light on our national origins and character. It’s telling that she favours the pictures of Joseph Lycett, who was transported for forgery, and re-convicted of the same offence. Most of Ross’s works could be described as tongue-in-cheek “forgeries”.

All the birds in these pictures seem to have no heads, as if they’ve been blown off by gun-happy colonists. View of Manly, land of the tame, uses a Lycett view as a backdrop for a woman in a Georgian era dress in an unlikely shade of hi-vis green. She is accompanied by a colonial version of a kangaroo with a matching green collar, perched obediently atop a pedastal. Both woman and nature have been ‘tamed’ in this suburb, named by Captain Arthur Phillip after the “manly” aspect of the inhabitants.

Ross’s satire is in complete contrast to Merran Esson’s work, which pays homage to old, corrugated iron water tanks and other relics of the manmade environment. In pieces such as A Different Skin # 1 (2014) and And Let the Rest Slip Through (2015), she transmutes these decaying utilities into sculptural objects. When Esson turns her attention to the natural world she reverses the process, reducing trees and shrubs to clusters of geometrical solids, holed like sieves.

A smaller piece, Bowl with incision drawing (2017), gives a good sense of Esson’s craftsmanship and taste for creative ambiguities. Although this deep green bowl looks like a crushed metal bucket, it projects an impressive solidity. The drawing inside the bowl makes it seem like a ritual artefact or some primitive measuring device. Most ceramic vessels are serene and self-contained, but this one has unusual ambitions.

Fiona Lowry’s paintings are so dominated by technique, it’s as if she feeds a regular image through a machine that spits it out the other end looking blurred and purplish. Like the photographer, Bill Henson, Lowry has two main themes: the human body and nature, but she doesn’t share his taste for dark, crepuscular settings.

Her pure landscapes seem intended to be as unnatural as possible, right down to the titles, which might be seen as poetic or simply bewildering. I act as the tongue of you (2008), shows the bushland on the banks of the Shoalhaven as a blurred mass of hot reds and small purple dots, against a bright white backdrop. It’s a striking effect but not exactly easy on the eye. This is, perhaps, what distinguishes a work of contemporary art, from a more conventional landscape: the acceptance that it may repell as many viewers as it attracts.

Mosman Art Gallery is more thematically unified, as the three artists: Janet Laurence, Caroline Rothwell and Robyn Stacey, each employ a wide range of media and have their own unorthodox takes on ‘the natural world’. The problem is the congested, heterogeneous nature of the display, which is partly the fault of the gallery’s awkward spaces, spread over two levels. Mosman is an unsympathetic place for ambitious installations and Rothwell’s sculptural pieces are not assisted by being crammed in and around the staircase.

Laurence has the best spot for her Elixir Lab (2005-21), a large collection of museum display cases, crossed with an overgrown chemistry set. The artist’s other installation to the right of the entrance, The force that through the green fuse drives the flower (2021), looks like a rather drab collection of plants in makeshift containers. The intention, of course, is more profound, but if one declines to read the wall labels, both Laurence and Rothwell’s works may appear confusing to the uneducated eye.

Three massive photographic prints from Stacey’s Dark Wonder series, bring upside down views of the outside world into interior settings. Because these interiors belong to Brett Whiteley, Arthur Boyd, and Martin Sharp, this adds a certain voyeuristic interest, but the density of imagery makes one wish they were displayed on a big white wall.

Regardless of any issues with the presentation, there’s so much going on in the Mosman component that I’d need a lot more space to venture any interpretations. By contrast, the best feature of the S.H. Ervin component, which features work by Bronwyn Oliver, Juz Kitson and Jennifer Keeler-Milne, may be its sheer clarity and directness.

Since her untimely death in 2006 Bronwyn Oliver’s reputation has only continued to rise, and her elegant, biomorphic sculptures made mostly from copper mesh, now look like classics. The forms are relatively simple, but the amount of detailed handiwork is staggering. Wall pieces such as Labyrinth V (1992) or Flex (1993), are serpentine spirals that need to be closely examined to reveal the rhythmic interplay of small tight patterns. We feel we are looking at a skin, but also a kind of exoskeleton. The power of these works lies in their execution and presentation, with no lengthy explanations required.

Juz Kitson’s ceramic works are similar in that she pursues a single, cohesive visual idea, elaborated with skill and perseverance. The tabletop work, Accumulated Associations’ (2019) is a mass of white porcelain forms, resemblng coral or leafy plants. Pieces such as The Sanctuary are extravagant concoctions of porcelain, fur and other materials, looking like something from one of Ridley Scott’s Alien films. There’s an obsessive dimension to Kitson’s work that’s reminiscent of Oliver – although that’s probably where the resemblance ends. It’s fascinating to see them side-by-side.

The final artist, Jennifer Keeler-Milne, stays within a strict set of self-imposed limitations but achieves impressive results. Essentially a graphic artist, Keeler-Milne works in series, drawing long sequences of clouds, sea sponges and feathers. The best is arguably 100 Feathers (2014-21), which features 100 separate charcoal drawings in which the feather is carved from negative space, white within black. A series of small, folding sketchbooks feature the most delicate drawings of trees seen from the floor of the forest. When Keeler-Milne ventures into colour she uses only red or yellow against black. Two oil paintings of wattle make the yellow of the flower almost as blurry as Fiona Lowry’s airbrushed images, but here the visual fuzz is intended to convey the vivid way the colour hits the retina.

If there’s a lesson in this show in relation to the natural world it’s in the way audiences respond to both nature and art. To a botanist a tree may be an object of staggering complexity but for most of us the primary response is aesthetic, taking pleasure in his height, its shape, its colour and leafiness. It may be wise for artists to concentrate on these powerful qualities, as Oliver does, and leave the analysis to the scientists.